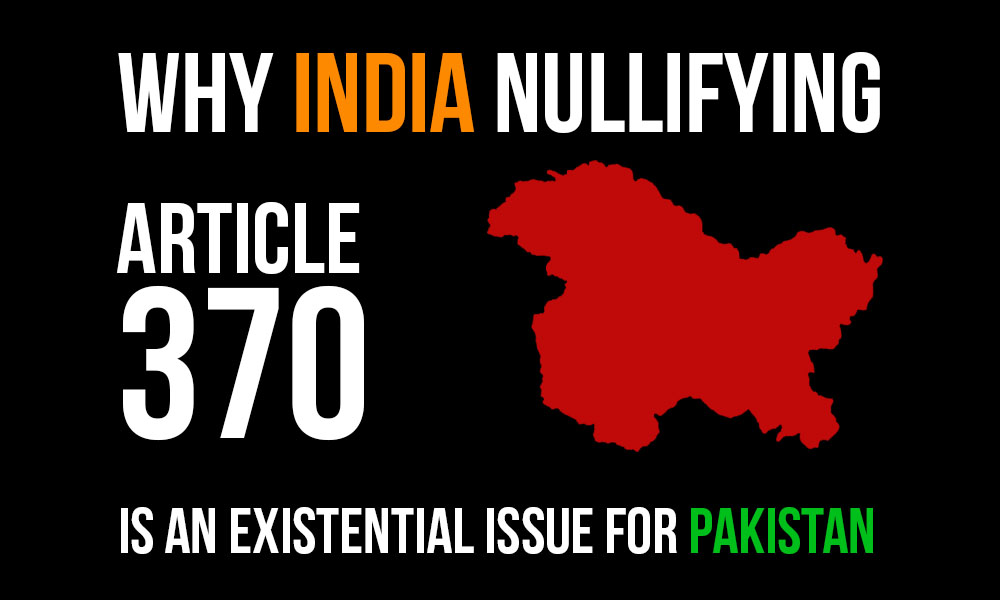 On the face of it, one would find it highly unusual that change of an internal arrangement within the Indian Constitution should excite its perpetually hostile neighbour so much. Yet, if you go behind the reasons for the creation of Pakistan, it would make perfect sense.

Pakistan was born out of the frustrations of Mohammad Ali Jinnah in the 1936–37 Provincial Elections held under the constitutional scheme laid out under the Govt. of India Act, 1935. Mohammad ali Jinnah expected to win a majority in the 482 Muslim seats, and then bargain with Congress for a coalition. It managed to win only 109. Its top performance was in United Provinces where it won 29 out of the 35 seats it contested, out of a total of 66 Muslim seats. Congress did not win a single Muslim seat in UP, though it had a clear majority with 133 out of the total of 228 seats in its kitty. Jinnah offered to form a coalition with Congress, but was rebuffed.

Jinnah had contested the 1936–37 elections on a nationalist plank. His poor performance even in the Muslim seats convinced him that he had to do something to become the exclusive spokesman for the Muslims, much like what Asaduddin Owaisi tries today.

So Jinnah sulked and was persuaded by Mohd. Iqbal to espouse the Two-Nation Theory. According to this Theory, Muslims were a separate and equal Nation, or Qaum as distinct from the Hindu nation. This concept of nation is based on the Muslim concept of Ummat, or Islamic brotherhood (Ummah in Arabic). Unlike the Hindu concept of nation as a civilisation, and the Western concept of an ethnic nation-state, this concept of Qaum is a purely religious concept.

Jinnah’s sense of betrayal by Congress, his overweening ambition, support of the Muslim Ulama, and the interests of the Muslim feudal class that felt threatened by the avowed Congress policies of redistribution of land, abolition of Zamindari system, and integration of Princely States — all aligned into a perfect line of congruent interests. It was in this background when Congress gave an opportunity to the League in October 1939 by resigning from all Provincial Governments over Britain’s unilateral induction of India into the 2nd World War. This idealist posture of Congress, dictated by Mahatma Gandhi, would have seminal consequences.

Jinnah celebrated 22 December, 1939 as Deliverance Day. He had already pledged allegiance to the British in the war effort. The British were obliged by this action of Jinnah, and they returned the favour by recruiting heavily from the Muslims of Punjab and NWFP. This, among other causes, was a major cause for bloody riots of partition in the areas that were to become Pakistan.

In 1940, the Pakistan resolution was passed by the League in its 1940 Session in Lahore. The Muslim League transformed into a totally communal outfit. Two-Nation Theory not merely sought a separate area for the ‘Muslim Nation’ within the Indian sub-continent, but also had the basic Islamic theology in mind as in the Hidayah (guidance) issued by Deoband and fondly approved by the All-India Muslim Personal Law Board, i.e. The earth is created by Allah for the enjoyment of his believers alone. Infidels are mere squatters. It quotes the Prophet and lays down, ‘We are directed to make war upon Men till such time that they confess that ‘there is no other God but Allah’.

Thus the original map of the sub-continent drawn by Chaudhary Rehmat Ali included every part of India having more than 20% Muslim population in Pakistan, or made it independent State, to be included in the Commonwealth of Pakistan later. The original idea of Two-Nation Theory was to take a nearly equal area out of India, and to later subsume the remaining smaller States into its Imperial fold, so as to be able to fulfil the holy task that remained unfulfilled during the Mughal Rule. League contended that India was many nations, and the Muslim nation was the biggest of them all. They were supported in this endeavour by the Communists, who acted on the behest of Soviet Union and their new-found friendship with the British. The Gangadhar Adhikari papers on behalf of the CPI were exactly on the same lines. CPI even submitted a plan for vivisecting India into Pakistan and 17 other countries on the basis of ethnicity and language. See the map below: Even Jinnah did not seriously think of his plan for partition to be feasible. He was merely playing for the maximum. The British, however, were keen to maintain a foothold in the areas abutting Afghanistan and Central Asia as a part of The Great Game they were playing with the Soviet Union for influence in the Central Asia.

The 1946 Elections changed the plans of the League. In 1936–37 Elections, Jinnah had failed badly in his mission to become the single voice of Muslims. In 1946, he achieved his dream. 89.5% of the Muslim seats were won by the Muslim League. The League swept every Province where Muslims were a minority. Even in Punjab, it fell short, and in Bengal, it formed the government, with the help of Jotindra Nath Mondal, a Dalit leader. In Sind, it fell short of majority by 3 seats, but help from the British and through some infamous defections, Muslim League managed to form the government in Sind with a wafer-thin majority.

When Nehru rejected the Cabinet Mission Plan for a weak centre and strong provinces with an option to secede, Jinnah openly used the religion card, and used riots and communal violence fanned by the Muslim Ulama, as well as by the organised hordes of Muslim League to make the partition of India inevitable.

Having achieved the partition on the basis of Two-Nation Theory, the Muslim League was disappointed at not having achieved its objective of getting the full provinces of Punjab and Bengal. As I pointed out in the map, the original plan was a grand Commonwealth of Pakistan, with the whole of Assam, Bengal and Punjab within Pakistan, with even Delhi in Pakistan, and the rest of India divided into many parts. The Muslim Ulama was divided into two shades of opinions — The Sufi Barelvi group, supported by the Shi’a and Ahmedi, favoured the Medina approach, i.e. Muslims should perform a voluntary exile to the Medina of Pakistan, gather strength, and then reconquer the Mecca of India, and complete the conquest of the sub-continent by Islam. Deobandis, on the other hand, supported by the Jamaat-e-Islami of Abu Ala Maudidi favoured the traditional approach. They argued that it would become impossible to convert India to Islam in a partitioned India. The ultimate objective of both the groups was the same — complete conversion of India to Islam. The believers and their Allah do not allow any accommodation as the Earth is supposed to have been created by Allah for his believers (ibid).

Given this background, and the long term objective of vivisection of India and its complete conversion to Islam, it was quite intolerable for the Pakistan establishment, which got reinforced by the large induction of the discharged 2nd World War decommissioned Army personnel, and a large Army, to even think about letting a Muslim majority Princely State accede to what they looked at as Hindu India.

So when Sheikh Abdullah was able to use his deception to carve out a separate status for J&K, Pakistan saw this as a validation of the Two-Nation Theory. That India had to accord a special status to its only Muslim majority State completed vindicated the Two-Nation Theory in the eyes of Pakistan and its establishment, and they could sell this snake oil to the Pakistani public. As the Pakistan dream kept fading, this spurious fantasy kept the public hooked to the dream of Ghazwa-e-Hind, and kept providing the Pakistan Military its essential life support from the public. When Pakistan came into being, it had got one seventh of India’ resources, one sixth of the area, one sixth of the population, and one third of its Army. This over bloated Army perfected the art of keeping itself relevant by becoming the protector of what is called Nazaria-e-Pakistan, which is nothing but an euphemism for the Two-Nation Theory.

This complicated relationship among the various organs of the Pakistani establishment, and the Army’s self-styled role of prptector of Nazaria-e-Pakistan has meant that it even espoused Jihad in order to pretend to fulfil the raison-détre behind the existence of Pakistan, i.e. conquer the Mecca of India from its stronghold of Pakistani Medina. The Army did try but failed, so it changed the narrative in its text books, spun all its defeats as victories. In the world view of Pakistani Army, a defeat in the conventional sense is not really a defeat. A defeat will happen only when it loses its anchor and will to fight.

When India rectified the mistake it made in 1949 by incorporating Art. 370, and scrapped its provisions, the Islamisation project has received a terminal jolt. After cleansing the Valley, the next project was Jammu. Even if India had offered J&K to Pakistan, they would have targeted other parts of India, because Two-Nation Theory ultimately seeks to end all plurality and diversity and make the whole world subservient to Allah.

It lost a part of this anchor when it lost Bangladesh. That took away the unity of Ummat (Ummah) part and deflated the Two-Nation Theory as well as the Medina Project, but the Pakistan Army recovered it by replacing J&K as the Battle of Badr project in its ultimate conquest of the Mecca of India. With J&K slipping away irrevocably by Art 370 getting abrogated, the remaining part of the anchor has drifted away. That is why the lament in Pakistan is as full of grief as it was after the loss of Bangladesh.

Because that anchor is now gone with the scrapping of 370 provisions, and J&K is now reduced to a mere UT, Pakistan is facing an existential crisis. The Medina Project has suffered an irredeemable jolt. Two-Nation Theory is over from India. Medina Project is over from Pakistan. The Army does not have anything left to protect.

Pakistan’s reason for existence is gone. Understand their predicament!