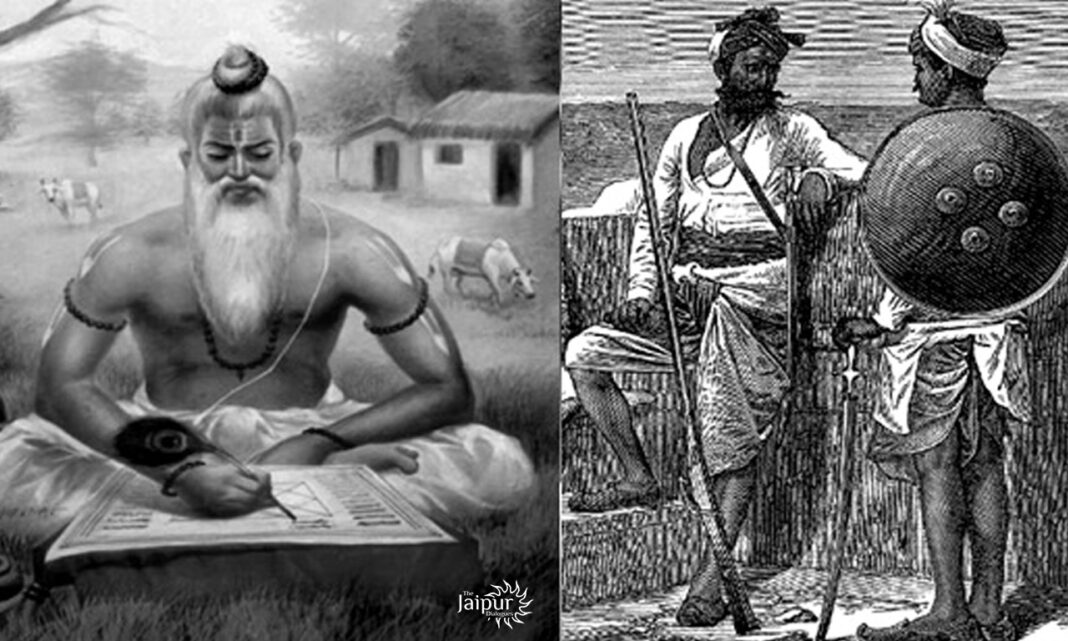 The prime minister of Kuru Empire, was the son of servant-woman. Vidura, a great visionary, strategist and bhakt. Because of his sheer knowledge and simplicity he was very much dear to Shri Krishna. Satyakam Jabala, a great rishi, was the son of a courtesan. Though, Acharya Haridruma Gautam took him up as disciple, because as a child he was pure, innocent and curious. And his mother also never hesitated to put up her ‘truth’. Therefore, Satyakama became ‘worthy’ of gaining knowledge and became a ‘Brahmin’.

Bharatiya Itihas is replete with incidents of Shudras getting a high position, a person moving from one ladder to other in the Varna system.

People who continuously blame and malign Manusmriti as the originator of caste-based system, have never read it. And yes, that is true. In the first chapter of Manusmriti, there is no mention of the word, ‘jati’ or ‘gotra’. It only mentions Varna. Varna is made of the verb root, ‘vrin’, which means to choose or accept. If the concept of jati had been so important Manu would have included it in the very beginning. Therefore, birth-based caste is not the original way of conduct. Rather, the attributes of a person and the way of life one wants to choose, gives them the social status. In the long run of history of Bharat, many interpolations and machinations changed the idea, concepts and practices.

Whether one is a Brahmin, but if he doesn’t know to cordially respond to the greetings, is a shudra.

Manusmriti establishes that change in Varna is possible. From Shudra one can become a Brahman, and a Brahman can become a Shudra.

A person pure from body and mind, living along with good charactered people, soft-spoken, devoid of arrogance, performing service to the people; such a person attains the status of a great Brahmin and becomes a dvij.

A Shudra is defined as a person devoid of Vedic knowledge, however, there are craftsperson who knew their respective art and practised it. They were Shudras too, but highly revered in the society.

As the story of Satyakam Jabala goes, his inquisitiveness as a child and truthfulness made other Brahmans to make an understanding of true thirst of knowledge. Manusmriti is adherent on the point. It says in shlok 2.238, that knowledge can be gained from a person even lower to you.

And in shlok 2.241, that in need knowledge can be taken from a non-Brahman too. Because knowledge is omnipresent, it is not something written in the books rather it is the purity of heart that enables one to realise the true fragrance of freedom. However people blame Manusmriti to be discriminating, but they should know that idea and concept of knowledge had always been diversified and all-expansive in Bharatiya culture.  A person having no knowledge of written words, can be full of true experiences of life and idea of truth. Saint Ravidas is a prime example of this in the modern context. He is revered like any other saint. Because the attributes decides a saint, not the birth. Knowledge is taken under a Guru and distributed to the worthy.

By reading and teaching, thinking, practicing chastity, discplines life, and speaking truth; by helping other, performing ones duties, giving alms and being dedicated to your principles, this body of human is said to ‘Brahman’.

The concept of ‘dvij’, the twice born, means the same thing. When a person gets eligible to be a student, his or her second birth happens.

A shudra, being a shudra is not humiliated, rather is said to be kept with care. Being a humble person, every householder is asked to keep them with respect in society.

The householder couple must eat food after properly feeding their servants (shudra).

If a Shudra or Viashya comes as a guest, the family must serve them food with respect.

It is to be noted that British propagated caste-based distinctions and established rigidity in social standards. The ploy of disintegrating the country on the basis of so called caste proved to be a menace in Bharatiya society.

The blatant lies that are propagated in the name of Manusmriti should be refuted in the strongest way possible. Because Manu promotes diversity. For a Shudra life is easier, more freedom is given to them. They are cared as a younger brother and also shown a way to right path. Evolution and devolution in Varna is the described social method. Action or karma decides the status of a person.