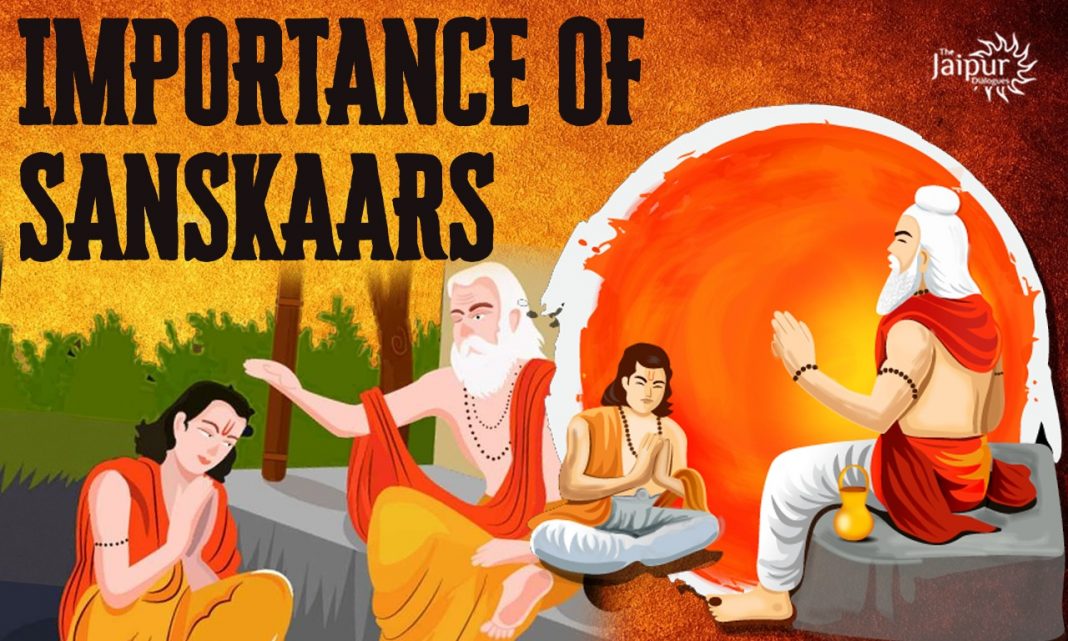 Unfortunately, under the garb of secularism, modernity, and progression, Hindus have gradually moved away from the essence of their traditions and cultural ethos. Not only is this sad but is also a worrisome trend, especially during such times when the Abrahamic forces are attacking Hindus from all sides.

Today, many Hindus have drifted away from their traditional Dharmic roots. To be ignorant of one’s religious practices and to make fun of those who follow them is considered ‘cool’ today. Being mocked for wearing a religious symbol, be it a teeka, bangles, etc., is not uncommon. The question is though, why is this cultural perversion rampant amongst Hindus? Whether Muslims wear their tabeez or skull caps openly or Christians wear a cross, nobody mocks them. One would be more likely to be chastised if it was pointed out.

The problem with Hindus

It isn’t easy for Hindus to wear their religious identity proudly. But what is the reason? Continual secularization of education and subsequent ideas have drawn people away from their roots. There is only one thing that is constant in such uncertain times: Dharma and culture, and people should understand it. They are the very foundations of our existence. By shifting away from centuries-old practices, we weaken society and make it more vulnerable to predatory attacks.

The essence of modernity in present times is to mock your own customs because if Hindus do it, they are backward. In case Muslims or Christians do it, it is a matter of freedom and self-expression. It is in the construct built by the global order, based on Abrahamic thoughts, that the hypocrisy lies. COVID-19 is still sweeping the globe, unfortunately leading to the death of thousands of people. Deaths like these did not occur in isolation but rather impacted scores of families.

Overnight, many children became orphans, many of whom no longer have family members. It is regrettable that many of these children will have none to guide them or teach them our Dharmic values.

Many children today have never heard of the Solah – sanskaars. Unfortunately, even parents in today’s times are unaware of our Sanatan Parampara. Holi is now majorly about being drunk and dancing lewdly; flashy parties are also part of the celebration. During Diwali, you’ll see ostentatious card parties, expensive décor, and elaborate dinner parties. Of course, progress is good and one should advance, but are we justified in compromising values and morals? A balanced approach to tradition and modernity can bring them both together. The Christians, however, who represent modernity, celebrate Christmas, Easter, and Thanksgiving in the original spirit. The Muslim community observes its festivals with true spirit, rather than being ashamed of them. But all of this pomp and show without actual essence of traditions is proudly carried with elan by the Hindus. In reality, the innocence and pure joys of celebrating the festivals with our loved ones have been lost.

Hindus living abroad are often ashamed of their beliefs and practices and prefer to be called secular or atheist rather than Hindu. Our practices, traditions, and symbols hold a deeper significance that most people do not recognize. The faith of the Hindus is somehow most gullible when it comes to the propagation of false theories and beliefs. Perverted symbolism such as Hitler’s Hakenkreuz being misrepresented as Indian Swastika, or Shiv Linga being interpreted as phallic.

Solah Sanskaars – The Importance and Significance

The cornerstone of our traditions are the solah-  sanskaars, which are:

Our chaotic society is a result of the absence of sanskaars under the guise of modernity. These traditions were designed and devised to improve people and create a positive impact on mankind. It was only after careful consideration and scientific calculations that our learned sages and Gurus worked on them. Sadly, this is mocked in today’s society. Clearly, the chaotic result is evident. On the one hand, where Hindus are seemingly ashamed of their traditions, Christians openly celebrate Baptism, whereas Muslims practice ‘khatna’. Though Quran finds no mention of circumcision, but it is mentioned in the Sunnah (the Prophet Muhammad‘s recorded words and actions). In the Sunnah, Muhammad stated that circumcision was a “law for men.”

Our traditions and rituals have a timeless relevance and importance that Hindus should realize and appreciate. The significance of human life is inherent in every solah – sanskaars. Children don’t properly touch the elders’ feet, and many people are unaware, rather mock anyone wearing bangles, applying bindi, etc. There was a time when the death of someone in the family was a somber occasion. Traditionally, it was spread over several days to mark the departure of one’s soul, but now it has become a shortcut. The importance of cultural roots has been overshadowed by the demands of modern life.

Hindus are being exploited by Abrahamics because of their cultural estrangement, as part of an ideological war. It is difficult for Hindus to counter Abrahamic fallacies since they are far removed from knowing themselves. Due to contemporary propaganda and hate-filled motives persuaded by global Abrahamic forces against Hindus, ignorance is not bliss. An understanding of one’s roots and knowledge systems is crucial to one’s survival and continued existence. The most significant thing is to be proud of them. In spite of being the oldest civilization on earth, the Sanatan Society is the most advanced and progressive. It has a rich history that must and should be preserved. Making conscious efforts to instill Sanatan values in their kids should be the goal of Hindus.