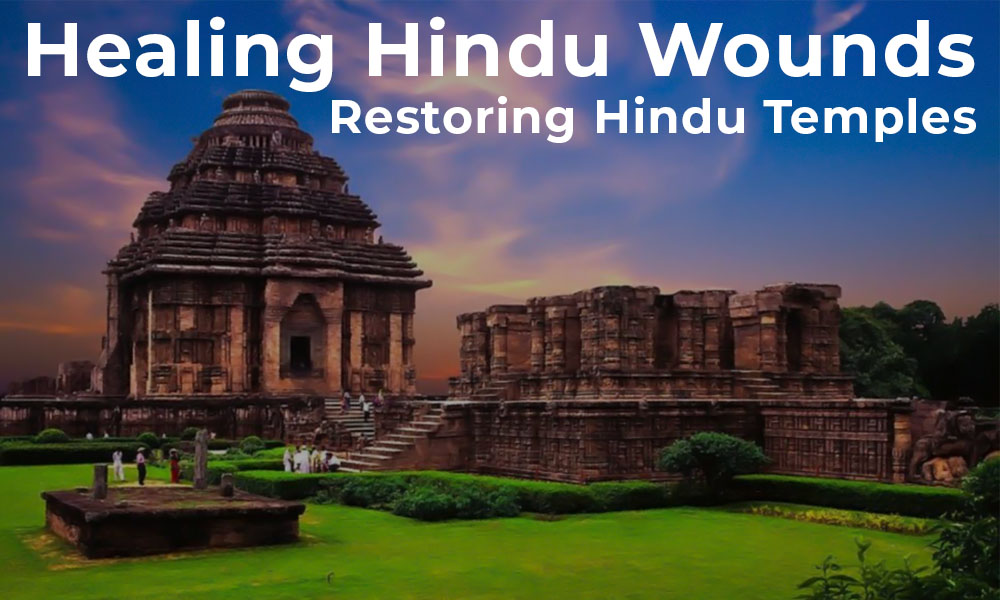 The Modern India post, independence and partition has been facing a huge dilemma over
assessing the course of their identity. Currently the Indian constitution recognizes itself as a Secular state where Hindus are in majority and people of other faiths are recognized as Minority. The current challenge that Hindus have been facing ever since Independence has been that of restoration of the sacred sites that were vandalized during the Islamic invasions. Here is the list of few temples vandalized, where mosques were built on top of them –

These are just some sacred sites vandalized during the Islamic invasions out of which in 2019, the Supreme court of India recognized that the mosque of Babur was built by destroying the Ram temple at Ayodhya. The archeological survey also revealed the presence of temple, the Mughal historians had recorded the destruction of the temple to support the presence of temple. However, what is astonishing is the struggle it took to bring a judgement on the temple, despite majority of India being Hindus, they had to waitfvalmi for four centuries to restore the site that is claimed and worshipped as the birthplace of Prabhu Shri Ram.

Reflecting on Valmiki Ramayana, it describes the life of Prabhu Shri Ram, Ayodhya, the lineage of Solar dynasty, the detailed geography of Bharat from the exile, search from Mata Sita, brings forth the wealth of Hindu civilization. Yet, the case for temple at the birthplace of Prabhu Shri Ram became a historic dispute as it reflects the struggle of existence of Hindu civilization in a Hindu majority nation. This is just one temple that the court has recognized, however, the current civilizational challenge in front of India is accepting its Identity as a bastion of Hindu heritage. From the case, it is evident, that the arguments given against the temple brought into question the existence of Prabhu Shri Ram/Ramayana as well, ignoring the invasions, ignoring the entire Hindu civilization as Ramayana is part of Itihasa.

Restoring rest of the Hindu temples in India will face similar challenge, but there are many lessons to be learnt from the case. I would like to bring forth incident of Valmiki Ramayana of Prabhu Shri Ram on Bali Vadha, for solving the issue of restoring civilizational Hindu history of India by restoring the temples. In the incident, Sugriva and Bali were brothers and out of misunderstanding, Sugriva was ostracized from the kingdom and was hiding in the Rishyamuka Mountains. Bali had violated the sanctity of relationship that one must have with his younger brother’s wife as she should have been considered his daughter-in-law. Shri Ramachandra restored Dharma (righteous code of conduct). This one incident shows how clear Prabhu Ram was clear about:

• Courage required to restore Dharma – he himself was in exile searching for Mata Sita, but that didn’t stop him from fighting against Bali whom he could have asked for help in search.

• Dharmic basis for Articulation of his stance – Bali did question Prabhu Shri Rama why he killed Bali and he was convinced from the articulation about his wrong doings as a result of which he advised his wife Tara and son Angad to help Shri Rama.

• Completing entire circle of judgement, where even the person whom he killed harbored no feelings of injustice.

This incident can serve as a solution for restoring the Hindu temples that have been vandalized by the Islamic invasions as they are evidence that Islamic invasions were indeed erasing the native identity of places they invaded as a result of which Parsis left Iran, Hindus & Buddhist of Afghanistan were reduced in their own lands and this persecution is still happening in present day Pakistan, Bangladesh.

This act of restoration brings the fundamental question to forefront – what is the need to restore Hindu temples? Though no one questions why a Mosque was built on the temple ruins? Why idols were vandalized till this date.

Hindu temples have their own science behind and are symbolic of reviving not only the Hindu civilization as a structure but revive the traditions around the deity, the way of worship, the entire ecology of the place where temple is built. This is not just a structure, it also a tribute to our ancestors that have courageously defended their way of life against all hostilities.

Does restoring temples in anyway threaten any faiths? Not really given the history of the
mosques, as most of them are built by destroying Hindu temples. The restoration work is not for destroying mosques but to restore temple. This is same as giving the person their home after being driven away out of their own homes by brute force and atrocities. Should such persecuted people not be returned to their original land that was taken away from them against their will?

Is it possible today to not have police come at your doorstep to demolish and illegal structure constructed by illegal occupation? Then why the hesitancy to accept the illegal structures constructed on sacred Hindu sites and heal the civilizational wound Hindus have been facing?

This restoration should come with articulation that convinces people of the world of the Hindu civilizational history of which Valmiki Ramayana is a foundation. There are still temples for which cases are pending in Courts. I hope we learn from Ramayana and take forth the challenge of restoring Hindu temples, a small step towards protecting Hindu civilization.