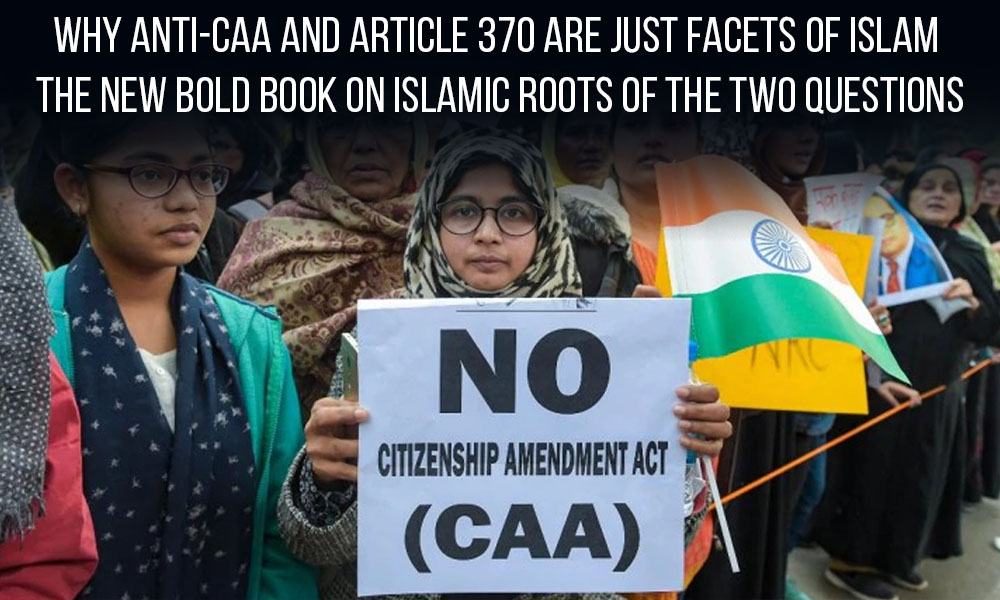 I was having a conversation with a senior TV journalist (of Madison Square fame) on What’s App. Zee News had just done a show on the various kind of jihads, such as Physical jihad (further sub-divided into population jihad, love jihad, education jihad, land jihad, and direct violence), and Ideological jihad (sub-divided into economic, history-writing, film and music, and secular disarming). This gentleman commented that ‘The unspeakable communal HATE that is being spread by this channel on daily basis is shocking, shameful, dangerous’, and also sent it to me.

This is, of course, the standard staple of the secular-liberal class of India, brought up as they are on a severely doctored history and diluted reality of the Muslim world-view. The entire conversation around the Citizenship (Amendment) Bill, which subsequently became an Act is based on a version of secular-liberal dogma that completely ignores the realities of Islamic ideology, particularly the variant of ideology that did prevail, and prevails till date, in India.

To this WA message, I replied back, ‘Have you ever cared to read the Hidayah of Deoband, and Fataawa-i- Razvia of Bareilly? Your statement doesn’t stand scrutiny in the face of these Islamic authorities.’

His response was along expected lines: ‘For which You demonise an entire community? Wake up and stop dividing India. Have a good day’.

I responded: ‘Entire community is bound by Taqlid. Learn some basics about Indian Hanafi Islam.’

He quit the conversation after this.

What I have reproduced here, especially the last sentence, is the crux of the matter. It lies at the heart of the most fraudulent agitation in the history of modern India, viz. the anti-CAA agitation. You may try and appeal to the reason and to the rational instinct of an entire community, but it does not matter. The community is forbidden to use ‘aql’ or reason under the principle of Taqlid. Reason is supposed to be exercised in 5/6 sects of Sunni Islam, and in all 5/5 sects of Shi’a Islam by only the authorised clerics, called ‘mushtahid’, or ‘mujaddid, or ‘muhaddis’, and usually designated as Muftis or high clerics authorised to issue fatwas. These are the worthies of Hanafi Islam that operates among the Indian Sunni Muslims, who constitute about 80% population among Muslims, and who are the bulwark of the anti-CAA agitation. Even the anti-CAA agitation is the culmination of what is a reaction riding on a felt emotion among the Islamic high priests of a loss of Islamic veto on national issues, such as nullification of Art. 370, and abolition of triple talaq, along with a failure to influence the judiciary into delaying a verdict on the Ram Mandir issue (realising that their legal position was completely untenable).

The book attempts to analyse the Muslim politics and national politics from this standpoint of deep understanding of the Muslim theology and general behaviour. This behaviour is no different from the behaviour of the Muslim and National politics that prevailed for the best part of pre-independence India, and post-independence India. It is, therefore, my attempt to explore the historical events and ideologies that form the foundation of today’s agitational politics by Muslim groups, supported by the Left and the pseudo-secular class that goes by the fashionable term ‘liberals’. The book, therefore, cites copiously from record, and from the books of stalwarts. I have found Dr. BR Ambedkar to be a particularly perspicacious scholar in analysing the idea of Pakistan, and the inability of mainstream Indian leadership to counter it because of what may at best be termed as ‘political correctness’.

Pakistan is not a territory. Pakistan is an idea that fundamentally dictates that Muslims cannot live together with non-believers in general, and murti worshippers (mushrikeen) in particular. This idea did not take root in the Muslim majority areas of undivided India, but in the areas where Muslims were in minority. United Provinces was the fulcrum, on which the ideologies fostered in Deoband, Bareilly and Aligarh rode high. The fundamental idea of Islam that the sovereignty of the universe belongs to Allah alone (also enshrined in the Constitution of Pakistan) manifests in its various sub-branches. One of the ideas that flows from it is that no Muslim should be ruled by a non-believer, and certainly not by a mushrik (murti-worshipper). Shirk, Irtidad, Nafaq, and Gustakhi (idol-worship, apostasy, hypocrisy, and blasphemy) attract capital punishment in Islam, and it is the duty of every Muslim to constantly strive for Dar-ul-Islam (House of Islam), even when he is living in a land of non-believer, called Dar-ul-Harb (House of War), by mentally being at war with such a rule. This is the idea that is taught by the two principal teaching centres in India, by Deoband (Deobandis), and by Ala-Hazrat, Bareily (Ahl-e-Sunnat, or Barelvis). That Barelvis are actually a federation of the 4 principal Sufi Tariqas — Qadris, Chishtis, Suhrawardys, and the Ullaia faction of Naqshbandis, along with many smaller Tariqas and Sanads. The Hidayah of Deoband, and the Fataawa-i-Razvia of Barelilly lay emphasis on this exclusivist, separatist, and supremacist idea of Islam, and give sanction to armed jihad. The Hidayah defines jihad as ‘shariat mein jihad deen-i-haq ki or bulane aur use qubool na karne wale se jang karne ko kahte hain’. This translates as ‘Jihad in Shari’a means inviting people to accept Islam and to fight those who do not accept it’. The Fataawa-e-Razvia has a full set of fatwas grouped under a generic heading ‘nafrat ke ahkaam’ (Ordinances/Commandments of hatred), giving elaborate prescriptions on whom to hate and in what manner.

The issue is not whether their interpretation is according to Qur’an or not. The issue is that the lay Muslim is not even authorised to do any interpretation different from that done by the ‘Ulāma’, or the High Clerics. That is the essence of Taqlid. Once we understand this, and also understand the vast funds controlled by the Ulama donated under the holy tithe of Zakat, and increasingly earned by the deceitful practice of ‘Halal Certification’, we can easily understand why the Ulāma wield such power over the masses even with totally irrational ideas such as Pakistan, or ‘CAA is against Muslims’. Political correctness only feeds into the power of this ‘mushtahid’ class. The book also discusses ways to deal with this class. The sane voices among Muslims have no chance in front of the muqallid (Taqlid following) class of Muslims as their voice simply does not count. They may be appreciated by the nationalist class, and by other communities, but within their community, they carry no weight. I had once asked this question to Arif Mohd. Khan in an interview, and he instantly acknowledged that Taqlid is ‘THE’ problem that insulates the Muslim masses from any rational discourse.

The Article 370 quagmire was also the result of this inability among the national leadership to read the Muslim mind. To have first denied the principle of 2-nations and then to have accepted a separate identity for the only Muslim-majority State of India was a betrayal of principles and acceptance of expediency, but the Ulama class welcomed it, for ‘any’ separate identity is a victory for the Ummat. Though the leadership has finally nullified the article, but if they are not careful, they may trip up again on the quicksand of ‘political correctness’, and appeasement of the religious leadership.

The book explores the two important legislative interventions of the new govt. in its first 6 months, and the predictable reactions to it against the backdrop detailed above. It has become a norm among public intellectuals to discuss the events impacting Pakistan (both in India and abroad) and our own secular establishment without any reference to the root causes. This book changes that paradigm of discussion. Through verifiable facts, the book is able to establish that the opposition to the book is a mirror image of the pre-partition politics of the Muslim League, to which the newly developed secular-liberal class has added its voice. This latter class is a transmogrification of the earlier socialists-liberals who have lost their relevance and mojo after the collapse of the Soviet Union and its economic model. The loss of power to influence issues and events by the liberal media has added to the urgency it often exhibits. The Marxist destruction of the Indian epistemic and logic traditions has provided an easy ingress for masking the irrational stance of the Islamic clerical class.

The book is meant to be more in the nature of a generalists’ impression of the quickly unfolding events, rather than a scholarly account. The basic writing was completed in a period of less than a month. The project got delayed because of the corona pandemic lockdown. I have addressed this book to the general public, with the object of spreading the light of basic education, rather than to the demands of high academia. That is why the discussion has not wandered into abstruse theory, and has liberally borrowed from various sources.

I must thank Vivek Agnihotri for writing the Foreword of the book, and Sandip Balakrishna for permitting me to use material from his publications. I have also to thank late Sitaram Goel and his Voice of India publications that have provided me with a beacon of light to navigate the labyrinths of the past. I also thank the Jaipur Dialogues Forum for its invaluable help in helping me procure rare source material. I must also thank elections.in for providing me with the elections data from the pre-independence period.