Busting Myths – A Lesson for Panchmakkars – 1 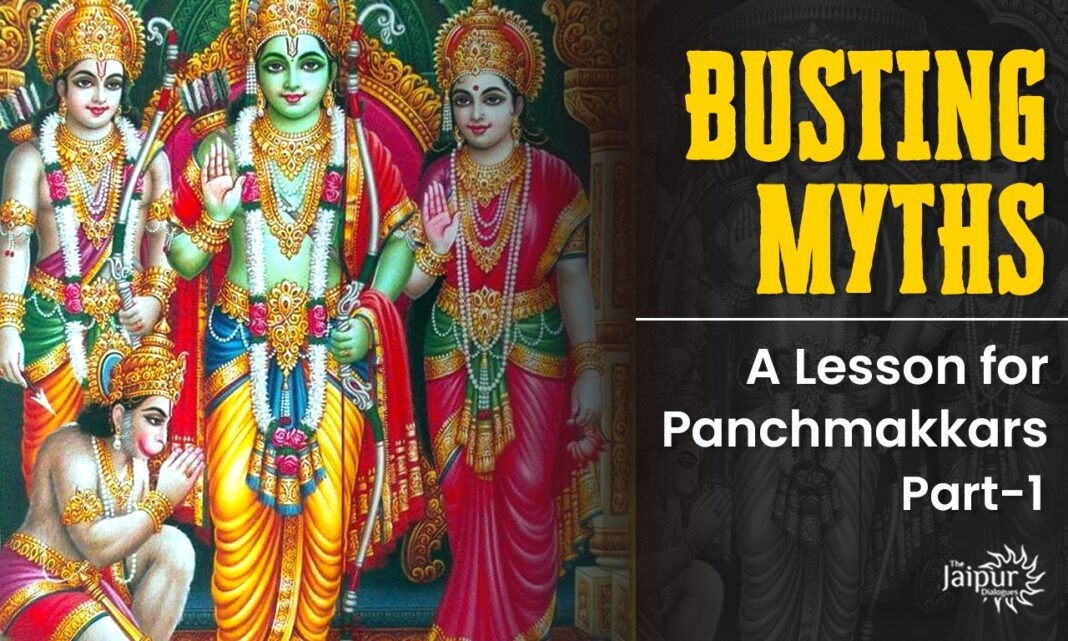 False and concocted lies are propagated by leftists, secularists, and Hindu haters without checking the facts. The propagandistic theory has been around for many decades to malign Hinduism History and misrepresent the truth. Although all the facts are out there, people still prefer to believe vehement lies over the truth. The youth of today is influenced by social media concocted stories rather than reading the actual facts.

Marxists are promoting a narrative that is contrary to our history of religious beliefs. Ramayan and Mahabharat are their favorite targets to mock our gods and portray them negatively. Differently targeted and insinuating questions have been asked, which reeks of ignorance. These questions have been addressed to us and to all the quintessential Bhakts. Our goal is to address some pertinent questions as fully as we can. Though if someone were to simply watch the animated movie on Ramayan, their queries can be easily answered. Sanatana’s appeal lies in its easy understanding and universal explanation, unlike Abrahamic texts and history that have varied interpretations.

Why did Hanuman Ji not take Sita Ma right away with him to Bhagwan Ram, despite knowing about her whereabouts?

The Valmiki Ramayan contains a beautiful excerpt that clarifies this. A passage in the Sunderkanda describes Hauman Ji’s request to Sita Ma to accompany him to Shree Ram.

“Mother! You may sit on my back, I will fly over the seas and unite you with Lord Ram just as Agni deva (fire god) carries the havis from the yagna to the devas”

Hanuman Ji’s intentions towards Ram and Sita are shown by this statement.

In spite of Hanuman Ji’s offer, Sita Ma declined it while discussing the subtleties of Dharma and why she could not accept it.

“Hanuman, Oh the mighty son of the wind god! Who else but you could have crossed the ocean of 100 yojanas. It is certainly my underestimating your capabilities, for I was deceived by your form. I understand your devotion to Rama and the purity of your character but I reject what you insist upon.

“Firstly, when you carry me, the rakshasas here would immediately get to know about my disappearance and wage a war then and there. It might not be possible for you to continue fighting with them taking care of me at the same time. Moreover, the outcome of a war is in the hands of the almighty, and god forbid if something happens to you during that time, I might fall into the ocean and that would defeat the purpose. Most importantly, Rama cannot live without me.

Even if you manage to win against the rakshasas and take me to Ram, the world will look upon my husband who is an able and fearless Kshatriya, also a Maryada-Purushottam, and utter ill words that he was incapable to get back his wife being a warrior, instead a vanara brought her back for him. As a dutiful wife, I am willing to bear any number of hardships, even dying in the hands of these demons, but I would never be responsible for bringing such a bad name to my beloved husband.

All that aside, the most important reason why I strongly reject the idea is that I am devoted to the vow of Paathivrathya. To me Ram is everything and as long as I am in my senses, fully conscious, I would never ever touch another male, despite the fact that you are like my son.”

Therefore, this myth about Hanuman Ji not being able to find Maa Sita falls flat on its face. Not only did he find her, but he offered to take her back to Bhagwan Ram even when there was no GPS tracking.

Why did Shree Ram take Lakshman along with him on the 14-year exile?

An individual who hates Sanatana Dharma cannot comprehend its essence. What does Dharma mean? Dharma means duty – not religion, whereas duty is essential for everyone to follow and adopt, be it humans or gods.

For a brief description of why Laxman accompanied Bhagwan Ram; Laxman was an embodiment of Sheshnaag. Vishnu’s perpetual consort, Sheshnag is represented by Balram with Krishna; trees, and land in Goloka or Laxman with Ram. It was Laxman’s duty to protect Shree Ram from all danger, even if it meant sacrificing his life for him. Therefore, giving up the kingdom and its associated benefits wasn’t a difficult decision, but rather a decision that was made out of love. As opposed to Abrahamic religions, where respect is forcefully demanded, this emotion of utter devotion and selfless love in Sanatana history isn’t forced.