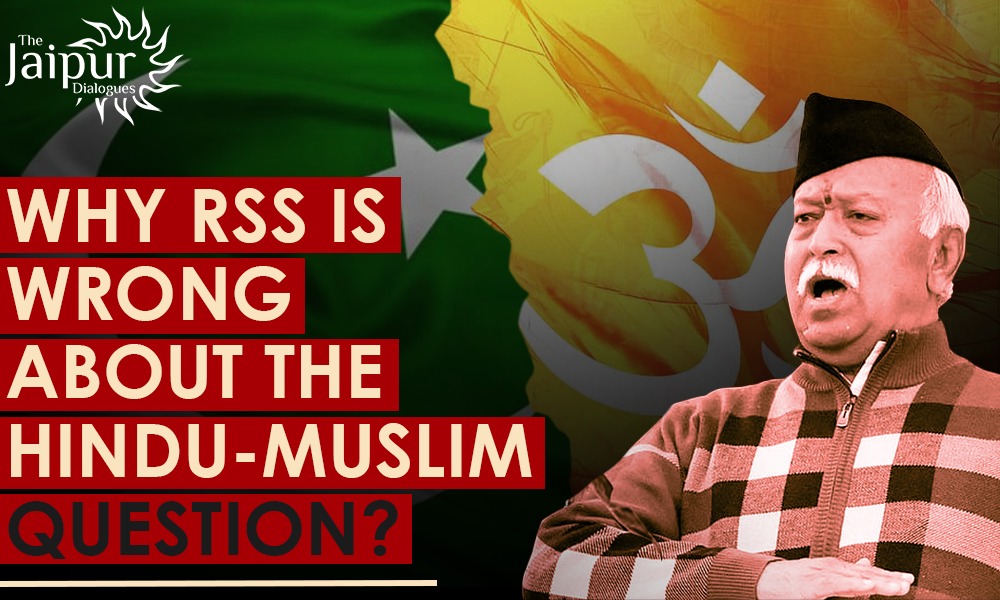 Faizan Mustafa recently wrote an article in the Indian Express titled ‘Mohan Bhagwat is right: British are to blame for India’s Hindu-Muslim division’. As the title suggests, the author toes the line of Aligarh Muslim School of History comprising of Islamo-Marxist historians led by Mohammad Habib who started the campaign of whitewashing history in the post-independent India. The roots of this whitewashing campaign can be traced back to the Congress and its desire of maintaining ‘Communal Harmony’ in the 1940s to portray itself as a Secular Party and to defy the demands of the Muslim league. Congress made a mistake in the 40s which the RSS is repeating in the present. Instead of confronting the bully, Congress started appeasing it. They created a fictional history of Ganga Jamuni Tehzeeb to attract the Muslim voters on their side (Which never happened). As Savarkar pointed out rightly, ” They (Congress) say, ‘before the British came, Hindu-Moslem riots were a thing unheard of’. Yes, but because instead of riots, Hindus-Moslems wars was the order of the day”. Congress failed horribly in convincing these ideas to Muslims who were bound by their faith and voted in extra-ordinarily large numbers to the Muslim League. However, these false narratives led by Congress along with the distorted idea of Hinduism believing extreme Non-Violence propagated by Mohandas Gandhi pacified Hindus to the extent that they even stopped questioning the false ideas propounded by Congress. People like R.C Majumdar or Sitaram Goel who dared to question this fictional history were socially boycotted from the academic circles which were dominated by the Left. To be accepted in society, citizens were expected to subscribe to the history dictated by the Islamo-Leftist cabal.

The Whitewashing of history that started as an academic project Post-Independence continues till date where historians like Bipin Chandra write that- The Hindus and Muslim rulers were same in their approach and the condition of a poor Hindu and a poor Muslim was similar. In fact, he goes on to say that a Poor Hindu had much in common with a Poor Muslim than that with a Rich Hindu. Except, the author forgets to mention that a Poor Hindu or a Rich Hindu never believed in slaying the non-believers. Hindus always believed in “EKAM SAT VIPRA BAHUDHA VADANTI”. Mr. Mustafa also tries to cover up with the same logic as Bipin Chandra and writes “The ruling elite of all religions oppressed peasants, indulged in plunder and at times, for purely political reasons, destroyed religious places. But there was no state policy to promote hatred and hostility between ordinary Hindus and Muslims.” While writing this, Mr. Mustafa seems to lack basic historical knowledge. The Maratha Empire and especially the reign of Chattrapati Shivaji Raje was called ‘Rayatecha Rajya’- which means the rule of people, where Rayat roughly translates to a peasant. Most of the socio-economic development that happened during the medieval period, including the welfare projects were carried out generally by the Hindu Kings. The Hindu rulers were busy helping their kin and developing their motherland while the Mughals exploited the peasants and created tombs with the taxpayers’ money. Also, when Mr. Mustafa mentions that there was no state policy to promote hatred or hostility between Hindus and Muslims, he fails to recollect or wilfully neglect that Shaikh Sirhindi said- “Islam and infidelity (kufr) contradict one another.

To establish the one means eradicating the other, the coming together of these contradictories being impossible…The glory…consists in the humiliation and degradation of infidels and infidelity. He who honours the infidels, insults Islam.” Shaikh Ahmed Raza Barelvi, the founder of Barelvi Sect said in Fatawa-E-Razvia that “It is impermissible to imitate the Kuffar, to mingle with the misguided [and heretics] and to participate in their festivals”

The author further writes in his article that ‘Despite the exploitation of peasants by the Mughals, people still saw them as their own. So, they (British) encouraged enmity first between Muslims and Sikhs by underplaying the Sikh Muslim History’. This statement is factually incorrect as the Indians never thought of the Mughals as their own. Numerous letters of contemporary rulers describe the Mughals as ‘Yavan’ meaning Foreigner. The general public sentiment was always against the Mughals. The reason behind this was Hindus were always treated as Second Class Citizens in the Mughal era. Except for a brief period of Akbar’s reign, Hindus were forced to pay Jizya for their survival and for carrying out their religion in the ‘Secular Mughal Rule’. They were humiliated for being idol worshippers and they had to live on the mercy of the Tyrant Islamic ruler. During the Jehangir era, no Hindu could even go out on the streets in the Muharram period. And the history of Aurangzeb is already talked about in the public discourse at great lengths after the ‘Fictional Historian’ Audrey Truschke’s novel, which does not need much explanation.

Mr. Mustafa goes on to write- “Unlike the British and Taliban, India’s Muslim rulers had demonstrated tolerance and contributed to creating the country’s composite, syncretic culture. Shariah was not strictly enforced by Muslim rulers. The king’s sovereignty, rather than God’s, was the central concept of their statecraft”. Any serious student of history would think that this statement is satirical, because again, in the words of Shaikh Sirhindi “The Shariat prospers under the shadow of the sword. It is the duty of Islamic rulers to enforce Shariah”. To complement that, Shaikh Ahmed Raza Barelvi wrote in Fatawa-E-Razvia that ‘’Islamic Law is the ultimate law and following it is obligatory”. Also, if the king’s sovereignty rather than god was central concept then why did the rulers assume titles like Zil-E-Elahi, meaning shadow of God?

There are multiple factual errors in the article and it is a completely fictional history that tries to shift the blame of Hindu-Muslim enmity to the British & completely sweep Q4:48, Q31:13, Q7:3, Q6:82, Q9:5, and several other verses under the carpet. In his conclusion, Mr. Mustafa again tries to make the same argument the Muslim league made before the partition. He indirectly conveys that the nation cannot be made by Hindutva philosophy and ‘If the RSS is interested in true nation-building, it has to lead the battle against communalism and prevent today’s ruling dispensation from continuing the British policy of divide and rule.’ Mr. Mustafa is a true ‘Imandar’ person who hints subtly that Hindus cannot assert themselves even in their homeland. If you don’t want the ‘communal’ tag, you will have to appease the Ashraf class again. However, the sad part is, the RSS has completely shifted itself to the Marxist narrative and today we have no Savarkar to assert “Henceforth the Hindu formula for Hindu-Moslem unity is only this: ‘If you come, with you; if you don’t, without you; and if you oppose, despite you’—the Hindus will continue to fight for their Nation”