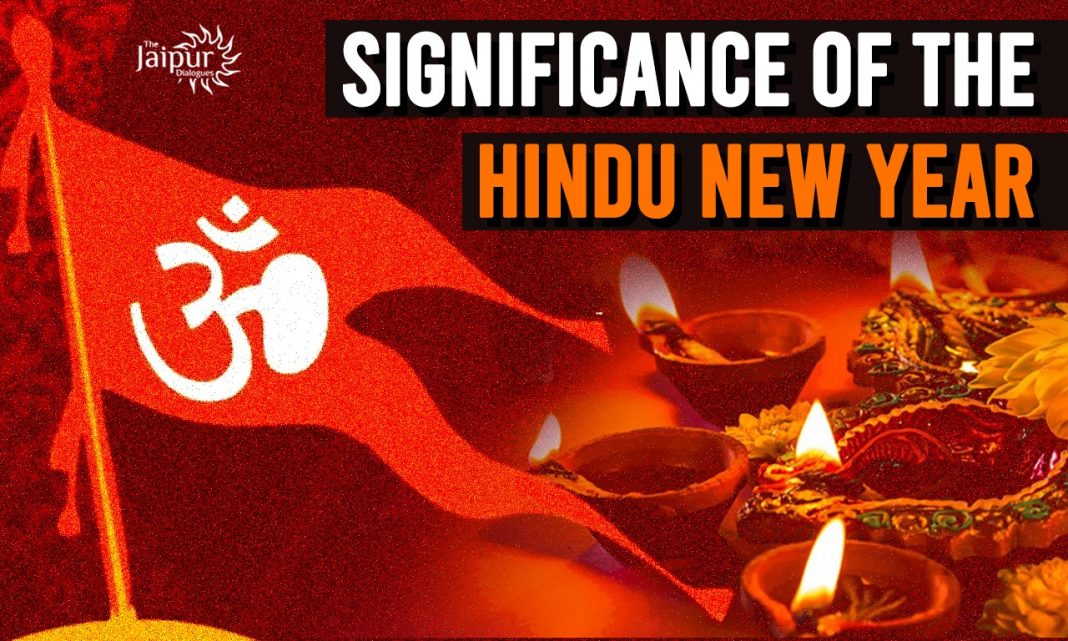 Hindus need to understand and appreciate their strong knowledge systems, case in point being the Vikram Samvat. The calendar devised by the mighty and strong ruler King Vikramadity of Ujjain, carries immense importance even today for Hindus.

With Abrahamic beliefs dominating the world, following their practices is not a novel concept for people across all different countries. The western world today has over the ages denigrated indigenous knowledge systems by undermining the belief systems of other indigenous cultures. They have adopted this practice around the world, with Native Americans, Africans, Indians, etc.

Those Abrahamics who adhere to a predetermined diktat prescribed in their religious scriptures or that is promulgated by their religious leaders will find it difficult to understand the dynamism and the scientific progress of the Sanatan Dharma. Unfortunately, today there is a trend among many non-believers and even Hindus who are unaware of their roots to mock Hindu practices and traditions. Many people are still following their centuries-old rituals and practices; one of them is the celebration of the Hindu New Year, which is determined based on scientific calculations.

Islamic and Western rulers did their best to promote their own calendar systems, i.e. the Hijri and Gregorian calendars. Fortunately still today Samvat is the calendar used by the majority of Hindus not only in India, but in Nepal, Cambodia, and Bali, et al. The Samvat calendar is still officially followed in Nepal. Despite the much popularized Gregorian calendar, Hindus use the Hindu calendar for calculating all auspicious occasions such as Baisakhi and Diwali, calculating marriage dates, Hindu New year etc.

The modern westerners who mock Hindu knowledge wisdom systems today were unaware of how a calendar was designed centuries ago. Originally, the western calendar only had ten months, which conveniently left out the winter months. Indian scientists were far ahead of their time and devised the most scientific time division in Three BC (Aetereya Upanishad, Shatpath Brahmin, and Rig Veda).

By hanging Galileo, the so-called ‘progressive westerners’ blatantly demonstrated their animosity with regard to scientific progress, as those principles were opposed by the priests and the Church. In contrast, Hindu scientists and sages solved complex mysteries of the universe, devised mathematical figures like zero, measured the circumference of the earth, gave astronomy to the world, and achieved many other feats.

Legendary king Vikramaditya of Ujjain designed the Vikram Samvat Calendar. “Samvatsara” is short for Samvat, which is basically a year. This calendar was designed in 57 B.C. following his victory over the Sakas in 56 B.C.

An account given by the Jain sage Mahesarasuri in the Kalakacharya Kathanaka states the following: “Gandharvasena, the then-powerful king of Ujjain, abducted a nun called Sarasvati, who was the sister of the monk. The enraged monk sought the help of the Śaka ruler King Sahi in Sistan. Despite heavy odds but aided by miracles, the Śaka king defeated Gandharvasena and made him a captive. Sarasvati was repatriated, although Gandharvasena himself was forgiven. The defeated king retired to the forest, where he was killed by a tiger. His son, Vikramaditya, being brought up in the forest, had to rule from Pratishthana (modern Paithan in Maharashtra). Later on, Vikramaditya invaded Ujjain and drove away from the Śakas. To commemorate this event, he started a new era called the “Vikrama era”.

A lunisolar calendar, the Vikram Samvat uses lunar months and sidereal months (time taken by Earth to complete one revolution of the Sun and its fixed stars). Correctional months are added or subtracted to match the sidereal year since the twelve months don’t always correspond to the twelve months in a year. According to the original design, the Vikram Samvat is normally 57 years ahead of the Gregorian calendar, except from January to April when it is 56 years ahead. A new year’s start month may vary depending on region or sub-culture.

It is true that many aspects of modern-day technology in current times were created by western scientists like Thomas Edison and others, which are useful for mankind. But this constant vilification of ancient Hindu scientific achievements, however, is not only shameful but also suggests that the west is elitist in its attitude. Our ancestors carved out a glorious heritage – one that has been maligned by a secular and leftist cabal – and its imperative for Indians to reclaim and thrive on it.

Wishing all the Hindus across the world a very Shubh Nav Varsh 2079!!!