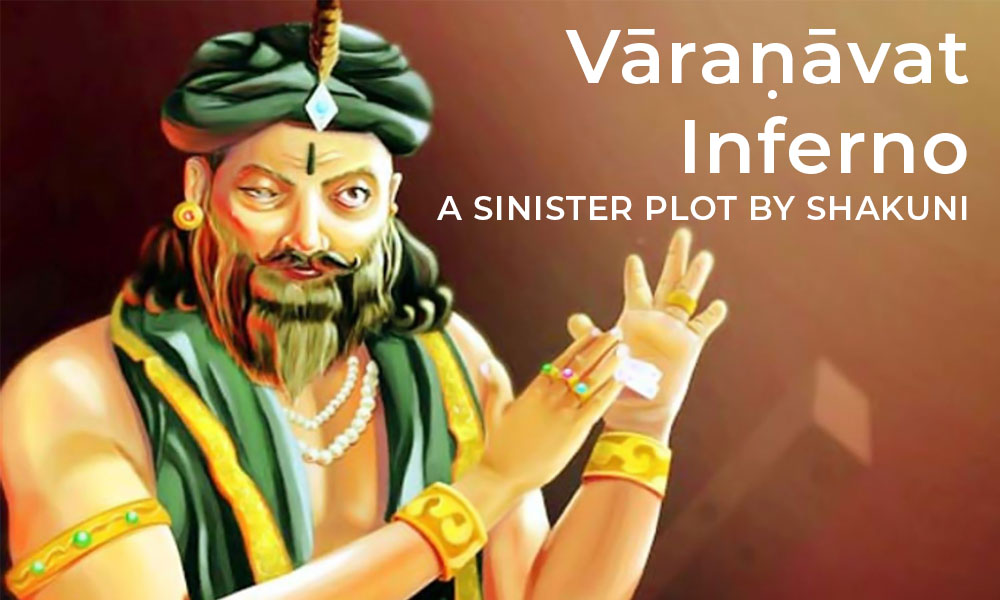 Duryodhana looked at Shakuni in great dismay. His faith in his maternal uncle was badly shaken. Shakuni, on the other hand, was his usual complacent self. After all, his whole idea was to wreak vengeance on the Kuru clan and Duryodhana was only grist to his mill that ultimately desired the extinction of the very Sanatana Dharma that had wronged his sister. It was a different matter that his sister would probably never know his officious concern for her. If only she knew.

Shakuni stroked his hair thoughtfully and wondered aloud whether the plot had leaked out. Karna made a snide remark that he did not know about Kutil Dharma but no Sanatani would ever betray a cause.

Duryodhana quickly doused the fire. He had two of his closest aides on the brink of verbal blows. One was a devout Sanatani and the other an equally devout schemer against the Sanatana.

Kaṇika was their next logical stop. They would require his services for the next venture. They were not sure that Dhritarashtra would approve one more venture so soon. Failure of this venture would also have to be communicated to Maharaja.

Duryodhana and Shakuni made way to Kanika’s place. Karna left them for his sandhya-pujana. Duryodhana knew that it was futile to persuade Karna. He was very strict about his priorities.

Kanika emerged after about half an hour. His face fell when he was informed that their elaborate plan had fallen through.

‘Never mind, Shakuni,’ said Kanika. ‘We do not regard Rājya as an organism. In our Kutil philosophy, it is the individuals that make up the society. The rights of the individuals matter more than Dharma, or the duty of individuals towards their own nature, or towards their community, or towards their country. The unity of consciousness bit is nonsense. Unless we actuate the individual greed, there is no progress. We must immediately set about getting the elites in our favour by exciting their individual passions. Fire the spark of aspiration in them; ignite the fire of avarice in them. Make the State a collective of individuals, rather than have the State as a Dharmic institution having its own conscious property and suffusing the individuals with that conscious spirit and uniting them in deference to that opaque Dharma. We need not go to Maharaja and tell them that we are going against Sanatana Dharma. We will change the tactic. We will present the elements of Kutil Dharma as the new innovations in Sanatana Dharma, and Jhankal as the new God who is nothing but a reincarnation of Rāma.’

Shakuni liked the idea. ‘I think this is a very good idea to repackage Kutil Dharma as Sanatana, digest the elements of Jatil Muni’s version of Kutil Dharma into Sanatana and present it as the new invention of a great rishi, Rishi Kanika. I am only worried about Vidura. Dhritarashtra is very fond of Vidura.’

‘Don’t worry. I have a plan for Vidura as well. Ask for a time to meet from Maharaja.’

Next morning, the group of four was with Maharaja Dhritarashtra again. Karna was upset with the shenanigans of Kanika and went with them reluctantly, only due to his fidelity towards Duryodhana. At the gate of the palace, Karna made an excuse and went back to his house.

Shakuni broke the bad news to Dhritarashtra. His blindness for Duryodhana was starker than his physical blindness.

Dhritarashtra went pale. His stolid appearance showed trepidation and confusion. He lost his composure, looked anxious and jittery. His alarm was not because of any remorse, but because he was scared of getting exposed. The secret wound that he nursed of having been deprived of what he considered his right to the throne always made him an object of easy intrigue. Bhishma had explained to him many a time that ‘in a Dharmic tradition, rights are adjuncts of duties. Rights are given to a king so that he can perform his Rājya Dharma. The concept of Dharma envisages an organic existence of mankind as a whole, joined by consciousness as a wave in an ocean with many different waveforms as part of one whole.’

Kanika had understood this. That is why he was insisting on the Kutil Dharma concept of divine rights of a king as the representative of the Almighty, whom he called Jhankal. Kanika’s ideas appealed to Dhritarashtra but his weak non-assertive character was such that he was even afraid to think differently from the prevailing norm.

Kanika was able to influence Dhritarashtra yet again. He emphasised the importance of the role of the individual over the country. ‘Maharaja, there is no way to justify the role of duties over rights. Duties can be given a greater role over rights only if the whole is greater than parts. Yet, that is not possible. Look at this orange. Please peel off the skin and try and eat it. You can see that orange is made up of its slices. Are the slices not orange? Is the orange not a collective of slices? The Vedānta would say that the whole is greater than its parts, but the sensory perception is everything. Can you deny what you see?’

Dhritarashtra mumbled what he had heard from Vidura quite often. ‘Brahman is not what you see, but Brahman is what makes you see. If orange is a collective of slices, why can these slices not grow independently? Why are they found only within the orange?’

Kanika had sized up Dhritarashtra quite well by now. He knew that Maharaja does not counter a counter, so he nonchalantly uttered an inanity. ‘Maharaja, if it is Brahman that makes you see, then I am the one who can take you to that Brahman, and that Brahman is Jhankal. Word is God and God is reflected through Word. It is the Word of Jhankal that has ordained that you shall have only your descendants as the blessed sons of Jhankal. You should give up your little hesitation and bless them till they can get rid of this evil called the Pandavas.’

Dhritarashtra, as usual, kept quiet. Shakuni nodded to everyone to indicate that they had the assent of Maharaja for their next plot against the Pandavas. Shakuni took over from this point onwards. He laid out a foolproof plan. ‘Maharaja, Yudhishthira will never refuse your direction. His sense of Dharma is suffused with the idea of pitra-ṛṇa, deva-ṛṇa and rishi-ṛṇa. He cannot even dream of not discharging his debts to the elders. He considers you to be his father. His sense of duty would never let him refuse a direction from you. Please direct him to go for a picnic to Varanavat. We will direct Purochana, the great architect to build a house of lacquer. When the Pandavas are blissfully resting in that house, we will put that house on fire. All of them will perish.’

‘But they will not go there without Kunti.’

‘Too bad,’ said Duryodhana, ‘Mata Kunti will have to burn with them.’

There was a knock at the door and Vidura appeared in the doorway.

Duryodhana cursed under his breath. Shakuni uttered a swearword and Kanika made faces. Karna had not come with them; otherwise, he would have given away the plot with his reactions.

‘Yudhishthira, you must follow the direction of elders. Do remember that nobody becomes an elder by virtue of only the age,’ Vidura said.

Yudhishthira was intrigued, but he bowed before the Maharaja and left. He did, however, go to Vidura in the evening.

Yudhishthira touched Vidura’s feet and both of them sat down on the ground on low wooden stools to continue their interactions.

‘Pitamaha, I know that you were giving me a message, but I am sorry that with my limited intellect, I was unable to grasp the message.’

Vidura spoke to him in riddles again.

‘Look, Yudhishthira, a weapon not made of steel or any other material element can be sharp enough to kill an enemy, and he who knows this can never be killed.

‘Fire cannot extinguish the soul but can annihilate the material body. But one who protects the soul lives.

‘The conflagration that devastates a forest cannot hurt a rat which shelters itself in a hole or a porcupine which burrows in the earth. The wise man knows his bearings by looking at the stars.’

Yudhishthira bowed before the wise man and asked him directly. ‘Why Varanavat?’

Yudhishthira persisted. ‘Purochana is a builder?’

Vidura laughed. ‘He can build and he can destroy.’

Yudhishthira was too sharp to not understand the hints being thrown at him. He also knew that Vidura’s code of duty prevented him from revealing the plot to its details, and also that his sense of Dhritarashtra’s adharma made it incumbent upon him to forewarn the Pandavas in an indirect manner. The

Pandavas dawdled and bought a lot of time. Yudhishthira himself demanded a palace be built, making Shakuni very happy. Yudhishthira also demanded that the new palace must be to their satisfaction. At the same time, Kunti sent a courier to Vasudeva, detailing the plot. Vasudeva consulted Krishna who was about to leave Mathura to escape Jarasandha. Krishna sent back a terse message to his cousins, ‘Get into the palace, build an escape route and disappear.’

The Pandavas left for Varanavat in a very happy mood.