Khandoba of Jejuri, The Malhari 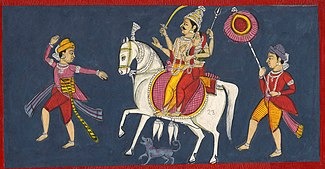 Worship of Lord Khandoba is very much prevalent in Maharashtra, Karnataka and Andhra Pradesh. He is the divine part of Bhagwan Shiva who incarnated on the earth to take people out of the great sufferings. Lord Khandoba is the Malhari king who is ardently worshipped by the mavlas of Chhatrapati Shivaji Maharaj. There are several stories of the miracles, legends and divine grace Lord Khandoba bestows upon his Bhakts.

The more popular and one of the first temples of Lord Khandoba is built in Jejuri in Pune, where the lord appeared in the dream of the cowherd and asked them to build his temple. Holkars of Indore worship Khandoba as their “kul-devata”. Lord Khnadoba is also known by the name of Shri Martand and Malhari.

As a form of Shiva Mahadeva, Khandoba is the patron deity of specific Kshatriya classes, farming class, Dhangar community and Brahmans. In the tribal interiors also Khandoba is worshipped by the devotees.

The name of the lord is derived from the word, “Khanda”, which means sword, this is a long blade used by the deities to slay the demons.

There are various folk lore telling about the origin of Lord Khandoba and the text Malhari Mahatmya accounts for the incarnation of Lord Shiva as Malhar.

Khandoba arrived on the earth to slay the two asuric brothers, Malla and Mani, who were torturing the common people by abusing their powers, which were bestowed upon them by the extreme penance of Brahma Dev. Devi Parvati incarnated as Mahalsa Devi in the house of a fisherman chief, and to marry her, Lord Shiva incarnated as Martand. Both of them challenged and killed Malla and Mani and stopped their tyranny.

Lord Khandoba is generally shown as a warrior on a white horse, and her consort Mahalsa Devi sitting in front of the horse is stabbing the asura’s chest with a spear. While a dog is also shown biting the thighs of the asura.

Temples and Festivals Attributed to Khandoba

Temple of Jejuri is one of the first and the most important temples dedicated to Lord Khandoba. It is located around 50 km away from Pune. There are 750 stairs to reach upto the temple, and there Shri Khandoba is present in the form of a lingam along with Mahalsa Devi.

There are many traditions and auspicious days dedicated to Khandoba. Like Somavati Utsav or Bhandara festival (turmeric festival).  The newly married couple also visit the shrine to take blessings of Lord Khandoba and Devi Mahalsa, who are also the God of fertility. Turmeric is hurled in and around the temple on this day and people also get covered in turmeric.

Champa Shashthi is also a six day long festival celebrated in the month of Margashirsha during the Shukla paksha. It is one of the most important festivals celebrated in Maharashtra and Karnataka.

The kind of devotion, love and personal attachment devotees have with deities is a symbol of Sanatan Dharma and the involvement of deity in the daily lives of people binds the culture to sustain for longer and longer periods of time.