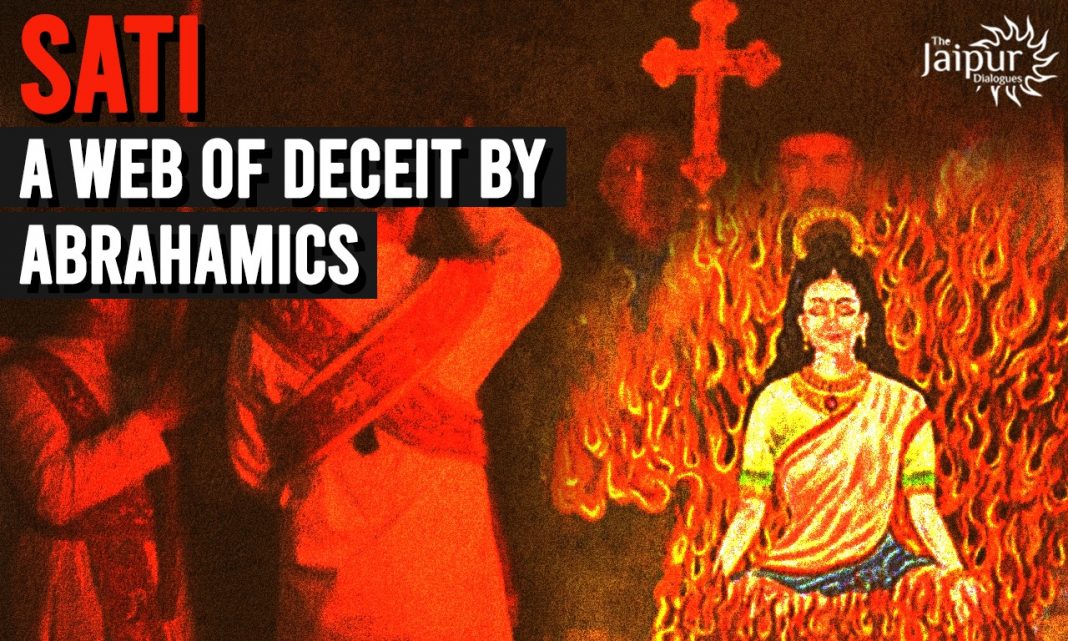 Abrahamics have always promoted Sati as a negative practice, combined with attempts to demean Hindus and the promotion of conversion activities. British historians presented Indian females as always oppressed and subjugated by males, which is in contradiction with our ancient social systems. It was always the British duty to civilize the uncivilized, which is what was known as the ‘White Man’s burden’. Christian missionaries came to India with the sole intent of pillaging the country’s immense wealth and replacing the progressive societal standards with their chauvinistic ideologies. This was in order to spread Christianity by hook or by crook wherever they could.

It is to be noted that the number of cases documenting female infanticide, foeticide, and Sati had risen sporadically during the colonial rule. The reason is that their missionary narratives run parallel to their belief in ‘saving souls’ and so the narrative became an active tool for conversion. Sadly, colonialism cultivated a false sense of history and belief system among us because of its brutal, oppressive, and barbarous rule. One that has deviated us further away from our ancient knowledge, and created a generation of people who question and mock their roots. It is now our generations’ responsibility to explain and believe our ancient practices.

There was no regular practice of Sati, rather it was a rare event. In some statistics shown by Subhodeep Mukopadhyay, only 0.25 of widows committed sati. The most hyper-realistic figure is 1 in 400. However, even if we assume a hypothetical situation where 95% of the cases were not recorded, the actual number is even lower and stands at 1 in 50,000 (0.002%). Comparing this to the number of suicides committed by females in the UK, one data set shows that 1 in 20,000 females committed suicide as recently as 2015.

It is important to note that Hindus and Christians share a different perspective on life and death, with the former adopting a more nuanced and balanced approach. It is not justified to take one’s own life, but there is a more detailed synthesis of beliefs and actions in Hinduism than in Christianity.

Christian theologian Augustine, who believed that killing one self amounted to committing murder and is a sin according to Christian beliefs, helps us in understanding the Christian viewpoint. He states in the City of God, “that Christians have no authority for committing suicide in any circumstances whatever. This is because the commandment “thou shalt not kill” includes not killing oneself, thus suicide goes against “God’s” commandments. He further states that human beings “belong to God” and not to themselves, hence they have no right to take their own life.

“For if it is not, lawful to take the law into our own hands, and slay even a guilty person, whose death no public sentence has warranted, then certainly he who kills himself is a homicide, and so much the guiltier of his own death, as he was more innocent of that offence for which he doomed himself to die.”

Despite the fact that suicide can occur under various conditions and should be discouraged, in Hinduism one may voluntarily and willingly give up their body, as in Jain Santhara or Sallekhana.

Due to the history of colonialism in our society, our judicial system and beliefs are shaped by Christian beliefs, and for this reason, Indian courts still deem suicide to be a punishable act. As per Nithin Sridhar, “there is a feeling of hopelessness and helplessness in a suicidal person, whereas no such feelings exist in a spiritual practitioner. The spiritual practitioner is dispassionate, self-controlled and practices Sallekhana for spiritual merit. While Prayopravesha is the act of dispassion and extinction of desire, it is understood by those with a spiritually high level of understanding, in short is a gyani not an agyani.

This choice of voluntary death was available to both males and females, as was seen in “The vivid description of how Dhritarastra, Gandhari and Pritha (Kunti) chose to die in the fire of the forest is found in 37th Adhyaya of Ashramavasika Parva”. As per Dr. Sammod Acharya, “within the Veda we have Yajna specifically recommended for one who wants to die voluntarily. This Yajna known as Sarvasvara (सर्वस्वार) or Shunaskarnastoma (शुनस्कर्णस्तोम. In Tandyamahabrahmana (Brahmana belonging to Samaveda) this Ekaha (Yajna finished in one day) has been specifically mentioned to be done by one who wants to die by entering to the fire of the Yajna”.

The practice of Sati was always a ritual or Yajna, and was, of course, never forced on anyone but always done with love and compassion. If there was any indication that the lady was hesitant about committing this act, her loved ones’ only role was to dissuade her from doing so.  “If the widow, after thus ascending the pyre, becomes afraid or loses her resolve to continue or simply does not wish to continue with the ritual, the texts note that one of her relatives must make her to get up and come down from the pyre.”

Since Sati was not a forced ritual, but rather was undertaken voluntarily by the women, how could the numbers of Sati cases recorded by the Britishers increase so rapidly?

“As Evangelical Christian movement started gaining more prominence in India starting from 1800, enumeration of sati incidents sky-rocketed and suddenly annual 10,000 sati incidents were being reported from Bengal alone in 1803, a mind-boggling increase of 2000x, and some even suggested 50,000 sati occurrences annually! According to government figures, 8134 widows performed sati in the 14 years between 1815 and 1829, of which more than 60% cases were recorded in Calcutta, a region which had almost no history of sati, thereby casting doubt on the validity of government data.”

Details were fabricated with ill intentions, i.e. to spur rapid Christian conversions among Hindus in India. As per Meenakshi Jain, “In the nineteenth century British Evangelicals and Baptist missionaries grossly exaggerated the occurrence of sati for two reasons. Firstly, they wanted to secure permission of the British Parliament to proselytize in the East India Company’s territories in India, which was denied to them till 1813. Secondly, to justify British presence in the country, they presented remarkable accounts of what they described as the evils of Hindu society, topmost among them widow immolation.”

Women were always subjected to archaic and restrictive laws and rules in the so-called forward thinking western society of today. The entire hullabaloo created in favor of feminism is simply a deliberate attempt to obscure their past failures. Modern-day champions of equal rights in the United Kingdom don’t have to look too far back in history to find that women were treated as second-class citizens in their society, which is why women were only given the right to vote in 1928.

It is high time, we need to objectively assess our own society and its traditions, unencumbered by the propaganda of Bollywood and the pseudo-intellectual leftist cabal, and thus free ourselves from the shackles of colonialism so that we can appreciate ancient teachings that will enable us to grow to possess higher spiritual inclinations and clearer goals.