Busting the Myth of Christmas 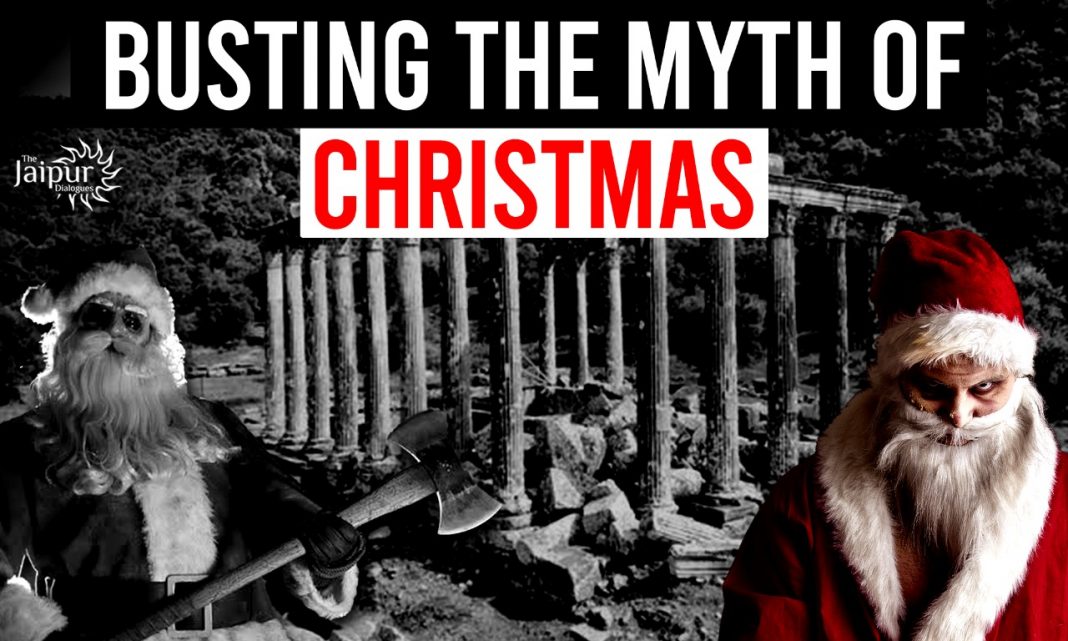 It’s Christmas season around the world and soon we’ll see Indians making their kids wear the cute Santa hat and celebrate this secular festival with zeal. But what’s the origin of this story? Is Santa even real? Is Christmas Real? Was Jesus born in Winters? Why is Christmas celebrated on 25th December? Behind these questions lie facts that would be pretty hard for the pagans to digest. Because the rise of Christianity and the fake charade of Santa Claus were built on the ruins of Paganism and Pagan festivals. However, today’s idol-worshippers have no clue about the aggressive expansionism of Christianity and the manufactured stories created to lure people towards the ‘True Religion’.

The Origin of Christmas:

In December, Romans celebrated a holiday called Saturnalia to mark the end of the harvest. The occasion was commended with a penance at the Temple of Saturn, in the Roman Forum, and a public feast, trailed by private gift-giving, consistent celebrating, and a carnival climate that overturned Roman norms. The Festival included singing, dancing, gambling, and even cross-dressing. The impact of the Saturnalia upon the festivals of Christmas and the New Year has been immediate. The way that Christmas was commended on the birthday of the unconquered sun (kicks the bucket Sol Invictus) gave the season a sun oriented foundation, associated with the kalends of (January 1, the Roman New Year) when houses were enriched with greenery and lights, and presents were given to kids and poor people. Hence the ‘Birth of Sun’ became the ‘Birth of Son’ (Son of God- Jesus).

In Northern Europe, a festival called Yule was historically observed by the Germanic groups. Researchers have associated the first festivals of Yule with the Wild Hunt & the Viking God Odin. Yule was celebrated on the arrival of winter Solistice. The celebrations included bonfires, decorating with holly, mistletoe, and the boughs of evergreen trees, ritual sacrifices, feasts, and gift-giving. Many of the traditions used in Christmas were borrowed from Yule traditions. From myths to feasts to folklore to oral stories. Leaving from its pagan roots, Yule went through Christianized reformulation, bringing about the term Christmastide.

When Christianity took over Europe in the 5th Century, the orthodox Christians refused to take part in these pagan parties. Hence, the Church manufactured stories regarding the birth of Jesus (Which cannot be in Winter as hinted by Gospels) to transform these pagan festivals into Christian festivals.

For over a thousand years, Christmas was a terrifying festival where drunken mobs took over the streets and threatened the rich people to donate food and wine or face the ‘Christmas Violence’.

When Puritans came to America, they believed that Christmas had no place in a Christian country and hence decided to ban it. In some communities in America, celebrating Christmas also led to strict fines. Due to this Christmas was pretty unpopular in America, until the 19th century.

The Story of Santa Claus

Santa Claus that forms the peak attraction of Christmas Festivity is celebrated with great excitement by the Schools in India (Especially the Non-Convent ones) without actually knowing the history and origin of the story.

Santa Claus is a popular name for Saint Nicholas who lived in the Eastern Roman Empire around the 3rd Century CE. In the 16th Century in northern Europe, after the reformation, the stories and traditions about St. Nicholas became unpopular. But someone had to deliver presents to children at Christmas, so in the UK, particularly in England, he became ‘St Christmas’, ‘Father Christmas’ or ‘Old Man Christmas’, an old character from story plays during the middle ages in the UK and parts of northern Europe. Later, Dutch settlers in the USA took the old stories of St. Nicholas with them and Kris Kringle and St Nicholas became ‘Sinterklaas’ or as we now say ‘Santa Claus’!

How did Santa become Popular?

On January first, 1881, Harper’s Weekly distributed Nast’s most renowned picture of Santa, complete with a major redbelly, an arm brimming with toys, and smoking a pipe! This picture of Santa turned out to be exceptionally well known, with more specialists attracting Santa his red and white ensemble from 1900 to 1930. Santa Claus was first utilized in Coke adverts in 1931, with the exemplary ‘Coke Santa’ being drawn by craftsman Haddon Sundblom. He took the possibility of Nast’s Santa yet made him significantly more amazing and sprightly, supplanted the line with a glass of Coke and made the renowned Coke holding Santa!

But Who was Saint Nicholas in reality?

Saint Nicholas who later became Santa Claus, had much darker shades to his existence than those portayed in the lovely fables of Santa. Saint Nicholas was an Idol-breaker who broke the idols of Greek God ‘Zeus’. He targeted Artemis, the daughter of Zeus and broke her temples wherever he went. The Story that Santa brought gifts is a half truth. He took the mission of conversion after breaking the temples and idols and later distributed the gifts to the latest converts as is used by Missionaries to date. This process of luring people into the Christian fold by offering them gifts was later linked with Christmas so that the recent converts do not go back to their old fold to celebrate Saturnalia Festivities. Saint Nicholas took the gifts from rich Christians and distributed them to the recent converts to stop them from going back to Paganism.

To conclude in the words of Sitaram Goel, “Closed creeds like Christianity which are not in accord with the spirituality of Sanatana Dharma have no place in India. No quarter can be given to these creeds in the name of secularism which they are using to subvert India’s ancient spiritual heritage. An examination of the doctrines and histories of these creeds shows beyond a shadow of a doubt that these are political ideologies of imperialism masquerading as a religion.”